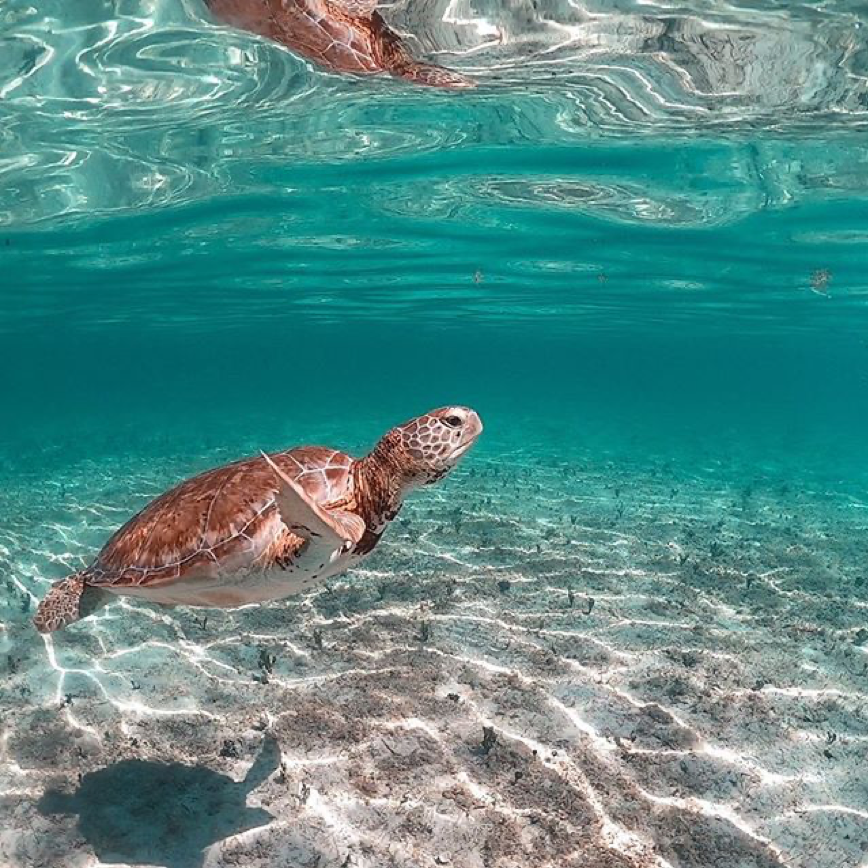 When you’re thinking about taking a trip to the Bahamas, animals probably aren’t quite exactly the first thing that pops in mind. However, you would be amazed about the various, wild animals this country has to offer. Read along as we’re taking you on a safari countdown, because The Bahamas truly does have it all.

What, sharks?! Aren’t those extremely dangerous?! Yes, they could be. But don’t be afraid, we’re not talking about the big white JAW shark here, we’re talking about ‘nurse sharks’. This friendly, slow-moving bunch of sharks live in the warm, shallow waters of the Bahamas. Their length can get up to 4,3 meters and their weight up to 110 kilograms. As they are – for the most part – harmless to humans, they’ve become a popular attraction and swimming partner for the many tourists who come to the Bahamas each year. 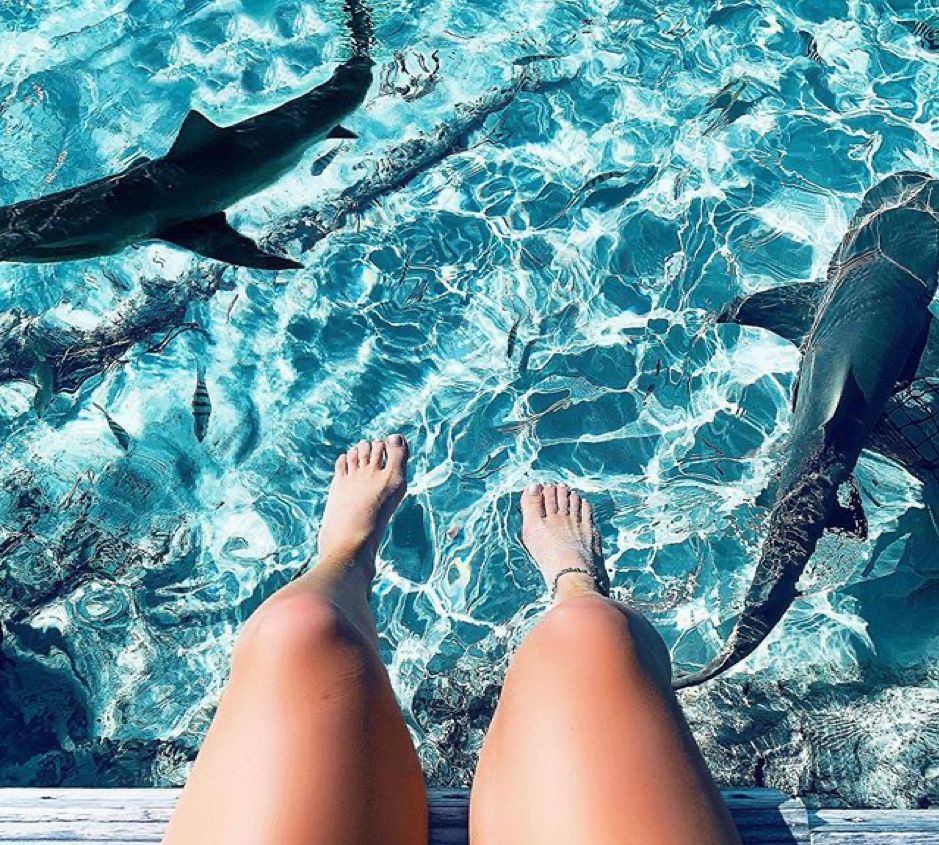 The Atlantic spotted dolphin often swims in the warm, crystal clear waters off the Bimini coast. Even though their wild nature, these dolphins still have the special ability to connect and interact with people. Therefore the chances are quite big that you’ll get a glimpse of these beautiful, joyful beings. Some boaters even might get lucky enough to see the ‘Bimini dolphins’ play in the midst of their boats, as they cruise alongside them.

Turtles are the oldest animal species from this list, as they’ve been around for millions of years. Four from the world’s seven sea turtle species can be found in The Bahamas, which are the Loggerhead, Hawksbill, Green and Leatherback. Since some time, a new set of laws made sure that it’s completely prohibited to harvest, possess, purchase and sell the Bahamian sea turtles and their eggs. Good news for the future of the four Bahamian turtle species!

At the Bahamian island Allen Cay, you’ll find – mostly because they’re quite hard to miss – the ‘Allen Cays rock Iguanas’. For a long time no one really understood why these subspecies were as big as they are, until scientists found out that the plants on the island of Allen Cay were much more nutritious than they were on the other islands. The Allen Cays rock Iguanas are pretty harmless against humans. They’re especially really friendly and welcoming to anyone who brings them a little vegetable snack.

The island of Big Major Cay – also known as ‘Pig Island’ – isn’t inhabited by people. However, the island is certainly called ‘home’ by some beings; a bunch of 20 cute pigs and piglets. You might’ve already heard about the existence of these swimming, Bahamian pigs, but did you know that the pigs aren’t native to the island? There are various stories that try to explain this mystery. One theory states that they were left by a group of sailors, that went away themselves, but planned to come back to cook and eat the pigs. Another one implies that the pigs swam away from a shipwreck and since then survived on the island. Anyhow, these different theories are all still theories, as researchers haven’t found the Bahamian pigs’ true origin yet.. 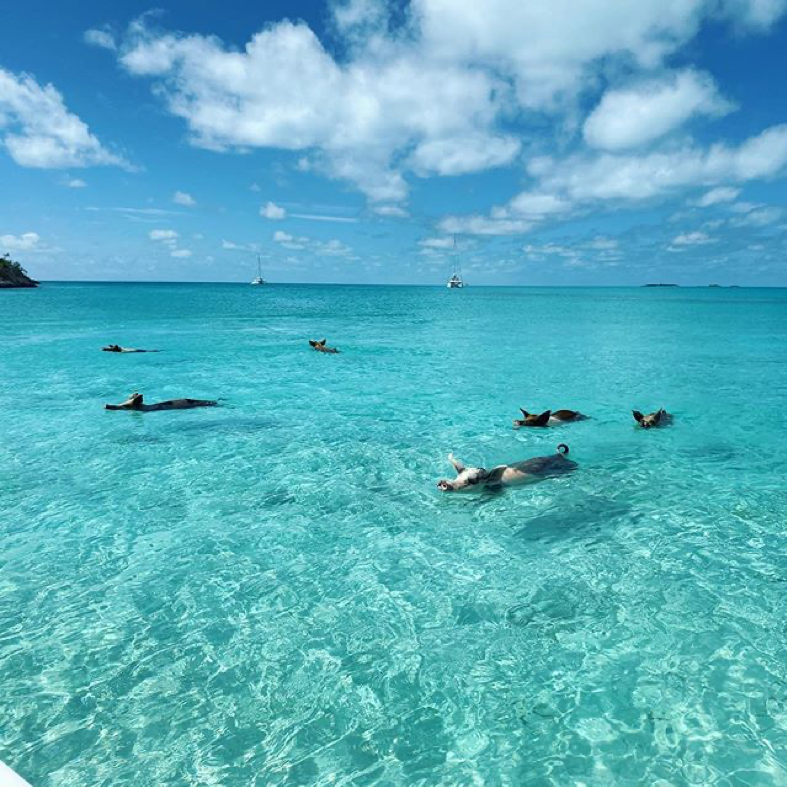 PS. Even though we listed a ‘Big 5’, we cannot keep the national bird of the Bahamas from you. So here she comes, as a bonus..

The 80.000 Bahamian flamingos bring a pop of colour to the islands as they paint the horizon pink. When their necks are all stretched out, they can be up to 1,40 metres tall. Their wingspan can be up to 1,50 metres and they’ve a life expectancy of 40 years. The best place to spot the Bahamian national birds is at the island ‘Inagua’. Over here, you can find over 140 other species of native and migratory birds besides the flamingo, which makes it the ‘Birdwatching capital’ of The Bahamas.

PPS. We love animals just as much you do! That’s why we would like to remind you that it’s okay to visit and discover these beautiful creatures, but that you always have to respect them. By just observing the animals in their natural habitat instead of picking them up, they’ll like you even more!